Exercising Your Rights at a Traffic Stop

Dare to exercise your rights during a traffic stop in a courteous manor? Possible lessons to take away from recent events.

Yes we have rights in a traffic stop, and yes we should get to exercise them. But your attitude and the manner in which you exercise your rights during a traffic stop gone tense will likely make the difference in whether you make it home from that traffic stop without getting arrested. When a traffic stop becomes tense for whatever reason it may not be SMART to forcefully exercise these rights in a challenging manner. There is a saying “Live to fight another day” these are probably good words to live by. 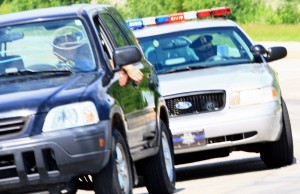 I am by NO means suggesting that if you are rude to a cop then you deserve unfair or bad treatment, or worse, police officers should be better than that, they are trained, given weapons and a wide birth of discretion. But my mother always told me this world isn’t perfect and life isn’t always fair, and I seem to remember her also telling me that I only get one trip on this rock.

I suggest to you that choosing to get into an ego war with a tense police officer is not very smart. If you choose to exercise your Rights at that moment despite tension I suggest to you that attitude and manner of speaking can make the difference in getting home without an arrest, or worse. If you give anybody in a position of authority a “Fu*k You” challenging attitude you are likely going to get it back in spades, this includes police, they have a hard job and they are only human. Ideals are great goals but this is reality so be real and govern yourself accordingly.

If a police officer asks your to put out your cigarette, instead of rolling your eyes and saying “No” or “I don’t have to”, try calmly saying “Respectfully Officer I was under the impression that I was legally allowed to smoke cigarettes during a traffic stop” or “I feel like you are getting upset with me, I do not want to escalate this situation but I would prefer to smoke my cigarette if I am legally within my rights to do so.” If a police officer directs you to put your phone down while you are recording the traffic stop, instead of “It’s my Right to record you and you can’t make me turn it off”, try “I feel like you are becoming upset with me and it is making me nervous for my safety so I am recording this traffic stop because I thought I had the right to do so, but if you are telling me I do not have that right and you order me to stop recording I will comply because I don’t want any trouble Officer.” A little respect and calm talking goes a long way in disarming tension sometimes. Instead of pissing the cop off further maybe you give him a chance to calm down and get a grip.

In a tense traffic stop the goal is two fold, exercise your rights AND make it home without an incident. Did the cop “win” if you put out the cigarette? Not if you are pissed about it as you are driving home instead of in handcuffs! And the exchange is not necessarily over, here is where “live to fight another day” kicks in. Afterwards or the next morning you can do several things, you can consult a lawyer, you can appear at the police station and file a complaint against the Officer, you can call or write a letter to your Alderwoman or the Mayor, your Representative or Senator, etc. I don’t think that any Police Chief wants a dirty harry cop on the street that is bullying citizens etc because he is a liability, especially considering recent events, and his bad behavior reflects poorly on the Department and its Chief. Complaints and letters are good because they make a record, they give the Chief documented notice of a problem, a problem he is responsible for addressing. It doesn’t look good and it creates legal liability when an Officer has prior Complaints, the Chief knew and did nothing, and further incidents occur with that same Officer. Written Complaints and Notice to the appropriate person(s) are the things that lawsuits are made of when no action is taken and future incidents occur. Be smart, make it home and be part of the solution.

Did you receive a traffic ticket, or were you the victim of a confrontation with a police officer? If so call Attorney Casey Coats at (314) 644-7102 for help with your traffic violations.

What Are My Rights When Pulled Over By The Po...

What Should I Do If I Get Pulled Over?