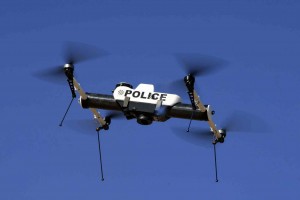 This drone is flown in a demonstration in Simi Valley, California, October 19, 2011. The tiny drone with four whirling rotors swoops back and forth about 200 feet above the ground scouring the landscape and capturing crystal-clear video of what lies below. (Gary Friedman/Los Angeles Times/MCT)

Police in North Dakota can now use drones equipped with tasers, tear gas, and rubber bullets. The original intent of the bill was to require police to obtain warrants for the use of drones. The original bill banned the use of weapons on drones, but due to opposition from drone makers and a lobbyist for the North Dakota Peace Officer’s Association. The sponsor of the bill, Rep. Rick Becker initially wanted to ban weapons from drones, but caved due to pressure from lobbyists.

“In my opinion there should be a nice, red line,” the Republican lawmaker told the Daily Beast. “Drones should not be weaponized. Period.” Luckily, the warrant requirement for the use of drones survived and is now part of the law.

Not everyone likes the warrant requirement, including Grand Forks County Sheriff Bob Rost, who says the police need surveillance drones to collect information to get a warrant. His department says they have used drones 21 times, although the Federal Aviation Administration (FAA) has records of 409 drone uses. It is unknown why there is such a large discrepancy in those numbers.

What is an SIS?